So who’s won my podcast war. Or, to put it another way, which podcasts do I look forward to? There are five that I listen too. Here they are in order of preference, but I do like them all.

I’ve recently added the TED Talks video podcasts as well. They look good but as always time will tell.

I needed a new chair to use at my desk. After much research I settled for a Herman Miller Mirra. It’s good. Still tweaking the various settings but so far it’s very comfortable and should help prevent back issues due to spending a lot of time at the desk writing, typing and computing in general. Click picture for larger view. 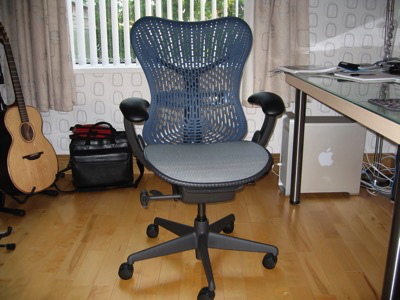 Vacuuming is a pain right? To quote Homer Simpson, “Can’t somebody else do it?”. Well failing that how about a robot? Enter the iRobot Roomba. Set it down in a room. Press clean button. Close the door. Come back later and it’s done 🙂

Of course it doesn’t do behind furniture (unless you move it out of the way first), doesn’t do stairs and can’t get right into corners, so you still need to do real vacuuming periodically. But for sheer geek value it’s pretty cool. Plus it does a really good job in the areas it does reach. I still have to get into the extras like timed cleaning, automatic return to power station etc. For my other vacuuming needs I have a Dyson DC15 All Floors with the The Ball. That’s pretty cool as well. Can’t believe I’m posting about vacuum cleaners. What’s the world coming to?

By Ian Robinson on July 1, 2006 in Science, Technology

Al Gore’s follow up talk at the TED conference on climate change is available to watch via video podcast from the iTMS. Well worth watching. The video of Sir Ken Robinson’s talk is very good as well. In fact, I’d recommend subscribing to the podcasts via iTMS and watching them all.

Apple have an article on their Pro website on the use of Apple products in the Sonic Arts Research Centre in Queen’s University.

Saw this on Cosmic Variance. We are all still here thanks to the common sense, nerve and intelligence of the Soviet military officer Stanislav Evgrafovich Petrov. See the details on Cosmic Variance, but basically he decided that a computer alert that the USA had launched a few missiles, likely with nuclear warheads, was a computer error rather than a real launch. So he failed to pass the info up the chain of command and therefore most likely averted a retaliation and possibly a full nuclear exchange.

I bought a MacBook Pro. I took it back a few days later. I already have a cooker in my kitchen. I didn’t need another one. Boy did that thing get hot. The serial number indicated it was manufactured in week 9. There is anecdotal evidence that those with week 12, 13 or later serial numbers run less hot. I’ll wait until later in the year and get one after a revision of the design I think.

By Ian Robinson on February 13, 2006 in Science, Technology

Scientific American has started a podcast. The first one is available via links at their site. First impressions are good. It’s got subdued production values and gives you information without a lot of gee-whiz bells and whistles getting in the way.

I’m crap at directions. Even in a place as small as Northern Ireland! So I decided to get some electronic help and, after some research and a recommendation from a few VMware employees I was out and about with last week, bought a TomTom GO 700. I went for the 700 as it was the only one with Northern Ireland maps as standard. Actually you get all of western Europe as standard on this model. The 500 and 300 only come with the GB part of the UK as standard. It has a 2.5Gb hard disk for storage. When you plug it into a Mac via USB2 cable it mounts as a hard disk (works on Windows as well). Mine has 1.4 Gb used and just over 1Gb free.

I’ve only used it in anger around Belfast to see what it is like. Bloody marvellous is the answer! The verbal instructions are very clear. You get plenty of prior notice about turns etc., both verbally and via the map display. It is very accurate as to where you are at any time. For example, the car location marker is drawn on a roundabout as you go round said roundabout. To navigate to a destination you can enter a postcode and it’ll calculate the route you need to follow. If you miss a turning it’ll recalculate the route based on your current position. Sometimes it’ll tell you to “Turn around at the earliest opportunity” for a while then calculate a new route based on the direction you are heading. If you don’t know the postcode you can enter road names (e.g. A20) or street names.

As a test one of my work colleagues gave me a postcode that is out in the back end of nowhere in the west of Northern Ireland. This place really is in the boondocks. It is 20 odd miles from anywhere even reasonably big. We entered the postcode and set the unit to demo route mode (another nice feature) and analysed what it came up with. My colleague, who makes the trip to this place regularly, was impressed with the route taken but also with the fact that it was able to navigate to the location at all. It even had a new mini-roundabout that was added recently in a town the route passed through.

I’m well impressed with it. The fact that it mounts as a hard disk under MacOS X means it’ll be easy to drag new and updated maps on to it as they are released as well. It also works as a Bluetooth handsfree kit for phones put I haven’t set that up. You can also subscribe to a service that will update you to traffic info and stuff via GPRS phones. I haven’t set that up either. I just want to get directions! It has multiple voices and multiple languages, both for the verbal instructions and for the menus. You can buy a John Cleese (it is actually him) voice as well. The interface is very easy to use as well. It comes with a suction cup wind screen mounting kit that is pretty unobtrusive.

I like it. More info and demos at the TomTom site.