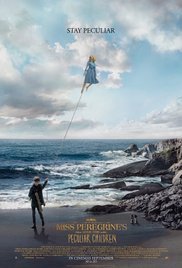 Loads of spoilers below.

Miss Peregrine’s Home for Peculiar Children is pretty standard stuff. All competently done if familiar to films that have gone before. The most interesting aspect was how existing in the 1 day time loops where the children live for protection means that they never get to grow up and experience life. I’d wonder if it was worth it. Samual L. Jackson does a lot of monologuing and I couldn’t help thinking about Frozone talking about that topic in The Incredibles. There is also a nice Jason and The Argonauts fighting skeleton section done with modern techniques. I rated it 6/10. 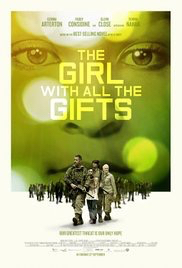 I never jumped on the zombie apocalypse train when it left the station a few years ago. It was fully laden though as plenty of others did jump on. Witness the popularity of TV shows like The Walking Dead, and films like 28 Days Later and World War Z. I did jump on the zombie comedy film train though, with the films Shaun of the Dead and Zombieland.

It won’t come as a surprise, after that preamble, that The Girl with All The Gifts is a film in the zombie genre. Although the zombies are called hungries in the film, and the book. The book is how I came to the film. I read it last year after it was highly recommended on several Sci-Fi blogs. I liked it a lot. Both the book and the film script were written in tandem by M.R. Carey. They tell the story of Melanie (played by Sennia Nanua in the film), who is one of a group of children being held in a military base and research centre in England. Here they are taught, while strapped into wheelchairs that are pushed into the classroom, by a sympathetic teacher called Miss Justineau (Gemma Arterton). They are also used in medical research by a team led by Dr. Caldwell (Glenn Close) who are trying to find a cure or vaccine for the fungal infection that turns people into hungries. Turns out the children are from mothers who were infected before the children were born, and have a less damaging version of the fungal infection. A sort of symbiotic relationship with it. So they are neither human or hungries. But something different, and new. Melanie is very smart and quickly learns and remembers things she is told or sees.

The military base they are in gets overrun by hungries and Melanie, Miss Justineau, and Caldwell escape in an armoured truck with two soldiers, Sargent Parks (Paddy Considine) and Private Gallagher (Fisayo Akinade). They plan to drive towards another military base but the truck is damaged and they have to continue on foot through the hungries’ infested suburbs of London. Melanie starts to play an important role in helping the group navigate the dangerous streets. The hungries don’t attack anyone already infected with the fungus, so Melanie is able to move amongst them safely. The film is actually a coming of age story as Melanie comes to realise that she, and other feral children who are like her, are the future of humanity as they can coexist with the fungal infection. She takes actions to ensure that she and the other children survive.

I liked the film a lot. The book has more detail and exposition, as you would expect. But the film is good in its own right. The performance by Sennia Nanua as Melanie is fantastic. And she is ably supported by the four other principle cast members. The depiction of post-apocalyptic London is very well done. As are the hungries. The music is very suspenseful. In lots of scenes it is just shifting harmonic tones, but it’s very effective. I loved the ending to the book, and it’s there unchanged in the film. You should definitely go see this, then read the book if your haven’t already. I rated it 8/10. 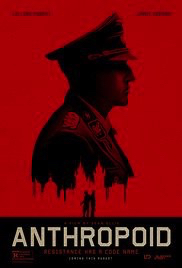 Anthropoid is a slightly harrowing account of the Czech resistance attempt to assassinate the Nazi commander Reinhard Heydrich in occupied Prague in 1942.

It tells the story of a pair of Czech resistance fighters, trained by the British in UK, who parachute back into Czechoslovakia with the orders to link up with the resistance in Prague and carry out their mission. There are other pairs who parachute in from the same plane. These other missions are not covered in the film but several of the parachutists are in the last third of the film when they are all reunited in Prague after their missions are over. The film has the drama, peril, and violence you would expect from one that depicts an authoritarian occupying force, without many scruples, who are looking within the general populace for resistance fighters. During some of the tense scenes my heart was racing. The first film since Room that has evoked such a response. In other scenes showing torture by the SS I was very uncomfortable about what I was seeing on screen. Harrowing.

Technically the film is excellent. A great depiction of 1940’s occupied Europe. The cinematography is great. The special effects and makeup are very good too. I don’t recall the music. The film isn’t a bundle of laughs, but as a resistance and Nazi occupation war film it is very good. Recommended. Rated it 8/10. 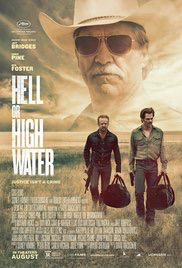 Hell or High Water is a modern western film. With all the things you would expect in a western, but with current setting. Events play out in rural Texas. Chris Pine plays Toby who is divorced from his wife and estranged from his two sons. His recently deceased mother has left him a ranch on which oil has been discovered. Problem is that his mother was in debt to the local Texas Midland Bank and they are going to foreclose on the loans if they are not paid back very soon. So money is needed quickly or the oil rich land will be lost.

Toby, and his career criminal brother Tanner (Ben Foster), embark on a series of early morning bank robberies of Texas Midland Bank branches in order to get the money to pay back the bank. Nice twist. Banks bleeding the people dry is an overarching theme of the film. All the robberies are small so don’t interest the FBI. They do interest the soon to retire Texas Ranger Marcus (Jeff Bridges) though, and he and his partner Alberto (Gil Birmingham) go on the trail of the robbers. Jeff Bridges plays his role in a nice gnarly way. And has a good rapport and banter with Gil Birmingham’s character.

The film has everything you would want from a western. Even a modern one. Dusty sunlit Texan vistas, bank robberies, a posse like band of locals going after the robbers, a shoot out, a good sibling story with a sacrifice, nostalgia for a time that has passed, and a moral message about generational poverty and the role of banks. I liked it. Rated 7/10. 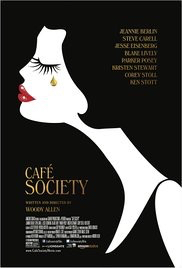 The plot is a bit thin. It tells the story of New Yorker Bobby (played by Jesse Eisenberg) who goes to Los Angeles in the 1930’s to live and work the Hollywood scene. His uncle Phil (Steve Carell) is a successful talent agent to several film stars. Bobby falls for Phil’s assistant Vonnie (Kristen Stewart) but she is in a relationship. Later that breaks up and she and Bobby become an item. But there is a twist, that I won’t detail as it would be a major spoiler, and it doesn’t work out. Bobby returns to New York to run a night club that his gangster brother has taken ownership of by nefarious means. Bobby meets Veronica (Blake Lively) in the club one night and they marry.

The story unfolds as the lives of the main characters intertwine over the years. And with the FBI investigating Bobby’s brother. To an electrifying end! There isn’t a big climax. The characters lives have ups and downs and go on after the end of the film. Well, for most of them anyway.

From a technical point of view the film is good. The script is typical Woody Allen fare. The delivery in the first half is a bit fast and staccato maybe. There is a narration at points through the film (done by Allen) that I found a bit jarring. Breaks the 4th wall and violates the show don’t tell maxim. The cinematography is sublime. As are the sets and costumes. The 1930’s Art Deco leaps from the screen. I rated it 7/10 on IMDB. For comparison I rated Irrational Man 9/10 last year.

I’ve stopped doing aggregate Culture Consumed posts and started doing individual posts. I’ve had this post sitting since the Culture Consumed 16 post. Posting this final one for completeness. Just to record what I read and watched.

Zoolander 2 – A sequel to the excellent Zoolander. It was harmless and made me laugh a good few times. Rated it 7/10.

Brooklyn – Beautifully shot and poignant story about emigration from Ireland to Brooklyn in the 1950’s. Rated it 7/10.

Down Station – Simon Morden. A portal to another world story that turns into a magic and fantasy story on the other world.

Hail, Caesar! An excellent tale of a 1950’s Hollywood cinema boss, Eddie Manix, trying to keep the studio churning, and the stars in and out of the gossip columns. It’s really good. Rated it 8/10.

The Divergent Series: Allegiant The third film on the Divergent series. I liked it a lot more than others it seems. Does what you’d expect. Post apocalyptic world, shinning futuristic cities, explanation on why Chicago is isolated. I bought it on iTunes. Rated it 7/10.

Spotlight Story about the Boston Globe journalists who uncovered the huge sexual abuse crimes of the Catholic Church in Boston. Good film. It won Oscar for best picture. I’d have given it to Room or The Big Short before this. I rated it 7/10.

How To Be Single – I laughed at this a lot in the cinema. Cheered me up no end. Must watch it again. Gave it 8/10.

You won’t be surprised to hear that I’m not a member of the Academy, and therefore don’t have a vote in the Academy Awards. Or Oscars as they are also known. But if I did this is how I’d vote. Order as specified on the Oscars website.