By Ian Robinson on December 7, 2019 in Books, Technology

We hear a lot about how state actors are using cybercrime techniques in order to influence opinion and attack infrastructure in other countries. But we rarely see a well-argued analysis that backs up this assertion. This book provides just such a well-argued analysis that outlines persuasively which organisations, and which country, were behind the devastating cyberattacks WannaCry, NotPetya, and others. And it outlines who is gaining malicious access to the control systems for the infrastructure that powers our modern world. Such as the electricity generation and supply systems, transport systems, communications and broadcast systems, and other industrial control systems. It also provides enough evidence to support the conclusion that the same, or closely associated, malicious actors were behind attempts to influence elections in Europe and the USA. Probably in other countries as well.

The case against the perpetrators, who are identified in the book, is built up logically and comprehensively. Everyone should read it and then draw their own conclusions. I know I have. One of the best books of 2019. Undoubtedly the best on cybersecurity.

The audiobook is really good.

I’ve always felt more comfortable buying digital goods outright if I wanted them. But lately, I’ve been subscribing to more and more services to get access to content. I think I’m now at the point where I’m close to being fully in the subscription model camp. It’s been a gradual transition. Much like the (fictitious) slowing boiling a frog metaphor I haven’t noticed until it was over.

The transition started with Apple Music. I subscribed to that when it was launched in June 2015. I first used it as a way to get access to new music in high quality from a safe and reputable source. But for a long time, I was still buying any songs or albums that I liked and wanted to have in my iTunes library.

Over the two years since the Apple Music launch, I’ve subscribed to several other services on an annual or monthly fee basis. My subscriptions list at the end of July 2017 now includes:

That’s a lot of software service subscriptions. When you list them out, it shows that this is rapidly becoming the new model for digital sales.

I joined NowTV to get access to Sky Atlantic for Twin Peaks The Return. As a bonus, I also got access to Silicon Valley and Veep. Plus Westworld Season 1 will be available from 14th August. So NowTV is a keeper. I subscribed to Netflix to watch The Circle film as it didn’t get a UK cinema release, and I wanted to see it after reading the book. Discovered lots of other good content on Netflix that is well worth the modest monthly fee.

I think that NowTV and Netflix were the services that tipped me over into the subscription model camp. In the last few months, I’ve noticed that I’ve stopped buying albums on the iTunes Store. Rather I just add them to my library from Apple Music. Not sure this is a good thing for the artists. I wonder if the same thing will happen with films over time. I’ve just bought The Ghost in the Shell on iTunes. Will I stop doing that in future and just wait for films to appear on Netflix? Time will tell.

The one product area in which there hasn’t been a viable subscription model for me to adopt is for ebooks to read. I do subscribe to the Audible UK subscription service that gives a single audiobook of my choice per month. For ebooks, the biggest subscription service is Amazon Kindle Unlimited. I’ve looked at it in the past, but it didn’t have many of the books I wanted to read. I must have another look to see how many of the books I’ve read or bought this year are available there.

By Ian Robinson on September 25, 2016 in General, Technology

You can’t beat a good fire as the nights draw in. Unfortunately I don’t have a good fire. I do however have an AppleTV, an HD television, and a good sound system. So I can have a digital fire. Using the fabulous Magic Fireplace App from Jetson Creative. It displays one of 20 different HD videos of fireplaces. With a pleasing wood burning sounds. Perfect for dark evenings on the sofa with a book and a big mug of tea. Video below.

By Ian Robinson on September 11, 2016 in Technology

I used to be an IT infrastructure person. I selected and installed the first Microsoft Exchange mail system in the large company I was working in during the mid 1990’s. I championed and introduced VMware as the virtualisation platform of choice in a different job in the mid 2000’s, before moving on to a technology innovation role to identify and champion new technologies.

If I was working in a company now in an infrastructure role I would have as much as possible of the server infrastructure off premise in the public cloud. I’d only have servers on premise, or in private cloud or a 3rd party data centre, if the data was too sensitive for a public cloud service. And in that scenario I’d adopt a hybrid cloud model with all the data I could have out on public cloud servers, with just the sensitive data on the in house part of the hybrid cloud. The public cloud services I’d use would be Office 365, Microsoft Azure, maybe Igloo for Intranet services, Slack for messaging, and Airwatch for endpoint device management. If any email accounts were mission critical I’d put them on the lowest spec Exchange Server possible in house as part of a hybrid deployment of Office 365.

The IT budget I controlled would be spent on having good redundant Internet connections and giving the users the choice of device they want to use. Be it Mac, Windows PC, iOS or Android tablet, iPhone, or Android phone.

By Ian Robinson on September 3, 2016 in General, Technology

Apple hold their annual iPhone event this week. I get a free upgrade on my mobile account on 26th September. I was at the opticians last week. Turns out these three things are actually related.

My optician recommended that I get new varifocal glasses that have a +1 decrease in the prescription strength for viewing things close up. Like an iPhone. I was going to do this. At the very high cost of £595 for the pair of lenses. Advice on Twitter was that varifocals are a pain so I started to have doubts.

iOS on iPhone has a zoomed mode that basically makes everything on the screen bigger. For use in situations exactly like the one I was having to get varifocals for. I have an iPhone 6s now. Apple will release iPhone 7 Plus and probably ship it on 23rd September. I can upgrade just after that. I’m thinking of getting the bigger model and using it in Zoomed mode. It’ll basically show the same amount of stuff on screen as my iPhone 6s in standard mode. But everything will be bigger. And won’t have to hold it at arms length to focus on it!

I’m running my current iPhone in Zoomed mode for the next few weeks as a test. If the rumours about the iPhone 7 Plus are true it’ll also be a bit of a speed demon with a great camera.

By Ian Robinson on February 18, 2016 in Apple, General, Technology

I love my Matias keyboards. But they are too heavy for portable use with iPad Pro. I’m not sold on the Apple Smart Keyboard for iPad Pro. Instead I will get an Apple Magic Keyboard to use with it. It will be cheaper, lighter, won’t drain the iPad Pro battery, and allows the iPad and keyboard to be further apart. Which will be better for getting a good typing position.

And I might get one of these in the future.

Update: Got it. It was the right choice. 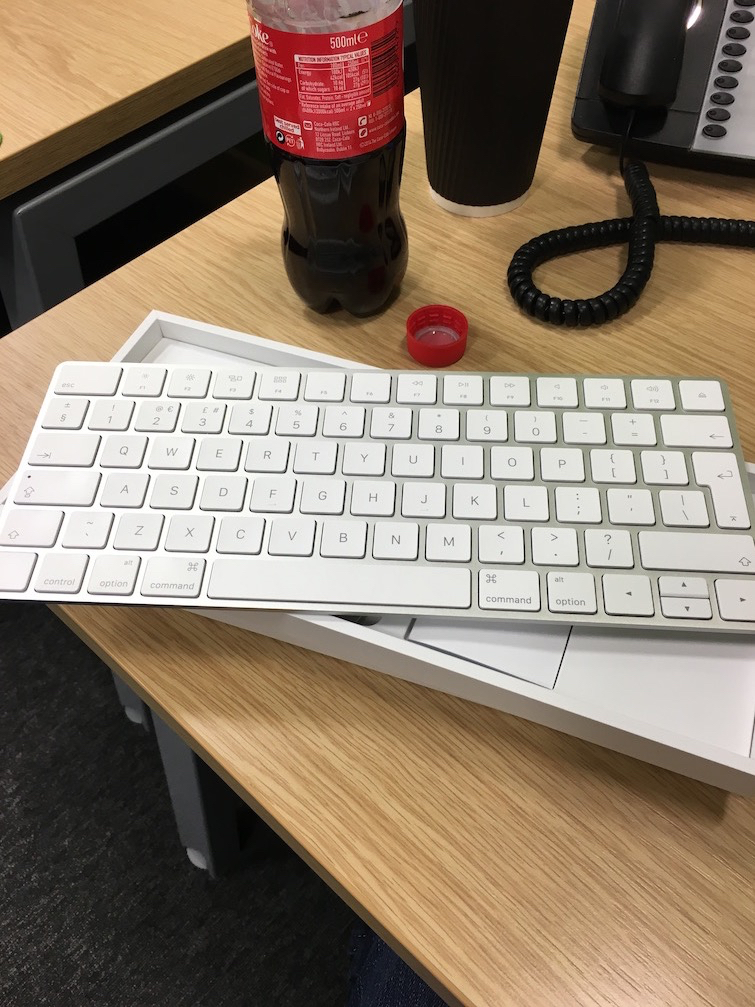 By Ian Robinson on September 26, 2015 in Technology

Defined by Scott Rosenberg in his book Dreaming In Code.

By Ian Robinson on August 9, 2015 in General, Technology

Edit – I’ll add the pictures bak into this post in a few days.

If you buy or rent films from Apple iTunes in HD format, and then try to play them from a Mac on an external screen, you might get this error:

The selected film won’t play on one of your connected displays.
This film can only be played on displays that support HDCP (High-bandwidth Digital Content Protection).

This is a copyright thing and there doesn’t seem to be a way round it if the Mac thinks your connected display isn’t HDCP compliant.

You can however watch the non-HD version of the film or TV show if you want. Right-click on the film or TV episode in iTunes, and select Video Quality-Standard Definition (SD) from the pop-up menu:
May not be in HD, but useful if you want to watch something from iTunes on an external display.

By Ian Robinson on August 2, 2015 in Technology, Watch

It’s been 100 days since I received my Apple Watch. As I outlined in my previous post I had three main reasons for getting one (beyond being an Apple geek!):

After 100 days it still fulfils those three functions perfectly. I wear it every day. In fact I feel naked without it. There are other features that I use. These are:

I bought a black Sports Band to replace the white one it shipped with. Black was what i wanted, but the silver Aluminium Sport didn’t have a combination that included the black band.

Was my Apple Watch worth £339? For me, yes. I’m glad I bought it. I’m still very impressed with it. Looking forward to the next generation of watchOS 2 apps later in the year. They will be faster as they are native, and do not need to rely on a tethered iPhone to function.

By Ian Robinson on August 1, 2015 in General, Technology

I bought a set of Sennheiser PXC 450 headphones in 2007. Love them. They are noise cancelling. When the noise cancelling is on the ambient noise in environment just disappears. Eight years is a long time and I noticed recently that the leatherette covers on the ear pads was deteriorating and starting to flake. So I ordered a new pair of official replacements. They were expensive but well worth it. Came with the fitting rings that hold them on already fitted. So they just snapped on. Now my eight year old headphones are like new again. You get what you pay for! 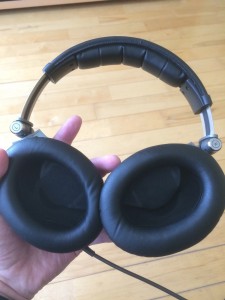